Home
News Roundup
Is a Bull Market for Stocks Bad for P2P Lending?

Is a Bull Market for Stocks Bad for P2P Lending? 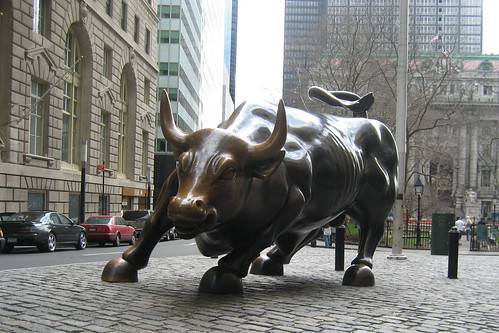 Today the Dow Jones Industrial Average was up another 200 points, continuing its almost constant move upwards over the last six months. It is up about 18.5% in the last six months alone, a pretty nice return. But this pales in comparison with the two year return. The Dow is up a staggering 87% since its low of 6,547 reached on March 9, 2009. You certainly will never get a return like that with peer to peer lending. Which brings me to the question, is a bull market for stocks bad for p2p lending?

Before we answer that question let’s take a look at some more numbers. In March 2009, Lending Club did roughly $3 million in new loan volume (Prosper was in their quiet period then). Last month (in the shortest month of the year) Lending Club did $14.6 million in new loans, about 500% more. So it doesn’t look like the bull market in stocks has had any impact on the popularity of p2p lending.

This makes sense when you think about it. Peer to peer lending is still so new that more people are discovering it all the time. As word spreads and more people hear about p2p lending, more money comes in. Then, of course, there are existing investors, many of whom put in more money or at least reinvest their interest and principle repayments. I don’t think anyone sees these short term gains in the stock market and decides to move their money out of p2p lending and back into the market.

As for me, some of the money I have invested came from money market accounts. A large portion was rolled over from corporate 401k accounts that were invested in a mix of asset classes, primarily stocks and bonds. What about others? Where have you diverted money from to invest in peer to peer lending?

Photo of the NYC bull courtesy of wallyg